On time - regular as clockwork - our Magellan Daisy is in bloom - last week of June.

Whaleboats. 18th and 19th Century whaleships carried 3 to 5 whaleboats each, depending on their size. Whaleboats were painted bright colours so they could be seen more easily and  launched at the sight of a whale and the call ‘Thar She Blows’.  Each whaleboat had a crew of 6, rowing  fast  to harpoon the whale. Often the whale would dive deep, taking with it the hemp rope attached to the harpoon, pulling the men in the whaleboat until it tired and they could pull it in close to kill with lances. 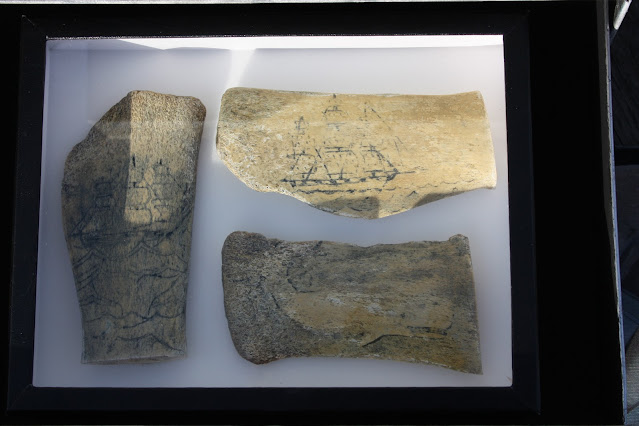 Spermaceti, a waxy substance found in the head of a sperm whale, made candles that were long lasting, bright and were almost smokeless. Whale oil burned bright, and was also used in many products including soap and as a lubricant on machinery. Baleen was strong but flexible and most was most commonly used in corsets.

A typical whalers voyage would last about 3 years.  They would return to port when their hold was full of whale oil.  Before launching, the crew would have to purchase everything needed for the long voyage, although many did not have the money to do so, the ship’s agent paid for it, deducting the costs from their wages which was a percentage of the profits, paid out at the end of the voyage.

Whale stamps for logbooks.  Whalers carved images of whales and other catches, from the teeth of sperm whales, wood, and bone, to use as stamps to be inked then printed in logbooks and journals. Often  a space was carved out in the whale stamp, leaving a gap in the printed image, where they could write down the number of whales caught or barrels of oil made. 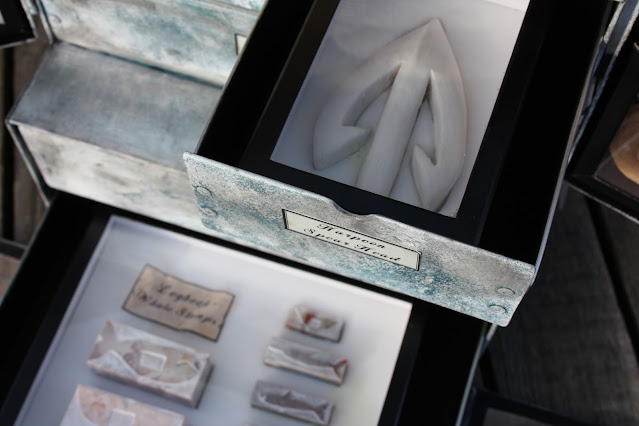 To indicate a whale that had been seen or chased but not caught,  whalers carved stamps to print in their logbooks, showing only the flukes of the whale. Other stamp carvings were more detailed, illustrating whaleboats, to indicate in their logbooks they had launched. 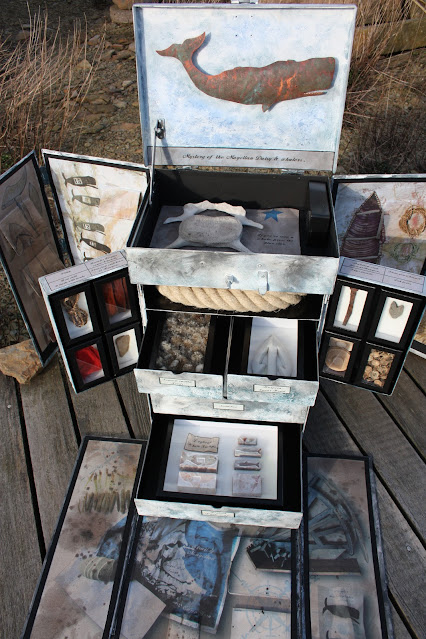 Herbarium sheets. This  pressed herbarium sheet (pressed plant), is of a Senecio smithii, a ragwort more commonly known as the Magellan Daisy. It was collected in 2013 from the garden of a ruined croft house at Hunspow. The croft is between the villages of Dunnet and Brough on the road to Dunnet Head Lighthouse, the most northerly point on the UK mainland.  The stunning white flower, a native of South America, is said to have been introduced to Caithness by whalers.  It’s still a mystery as  there is no evidence confirming how or when the flower arrived in Caithness. 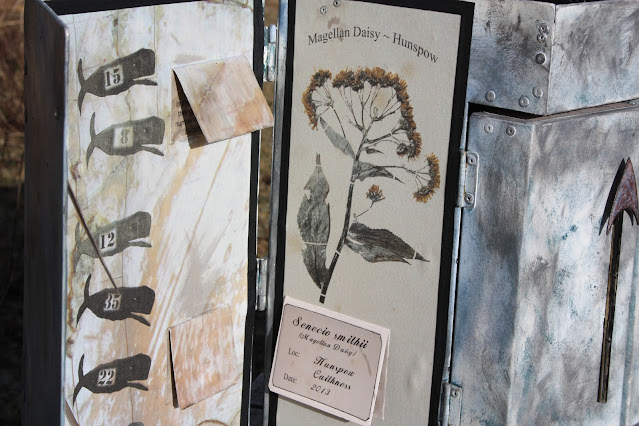 The earliest recorded date of a pressed herbarium sheet of a Magellan Daisy collected in Caithness, is July 1921. It was found in a ditch near John O’Groats.  Another sheet records a specimen collected at the  mouth of the burn in Dunnet, in June 1964. The Magellan Daisy was also collected on the Orkney Island of Hoy in September 1931.These herbarium sheets are part of the collection at the Royal Botanical Gardens, Edinburgh.

Natural Histrory Museum. In 1863, Robert Dick the baker and botanist of Thurso, received a letter from a professor Owen, asking him to confirm reports that the whale washed ashore at Sandside bay, Reay, Caithness, was indeed a sperm whale. Robert Dick, had little knowledge of whales and was in bad health, and decided not to take the long walk to Sandside and must have made other arrangements, as the skeleton of this sperm whale is on display in the Natural History Museum, London. No Magellan Daisies have been found in Robert Dick’s pressed herbarium collection in Caithness Horizons Museum, Thurso. Was the flower introduced to Caithness only after his death, or have the herbarium sheets been lost or destroyed by insects? Robert Dick 1811-1866

James Bruce is the last recorded occupant in the mid 1900’s of the croft at Hunspow, where the Magellan Daisy grows in the garden.  His wife Helen, is supposed to have been given the flower by her uncle, a Mr Banks.  In Dunnet Village near the burn, an archaeology dig revealed the whale bone crucks of a barn once owned by Harry Brotchie.  The whale bones are now on display in the Seadrift Centre at Dunnet Beach.  Were any of these men whalers who sailed to South America?  A letter dated 24th July 1815, in the National Archives of Scotland, refers to the Thurso Whale Fishing Company. Where were their whaling rounds? 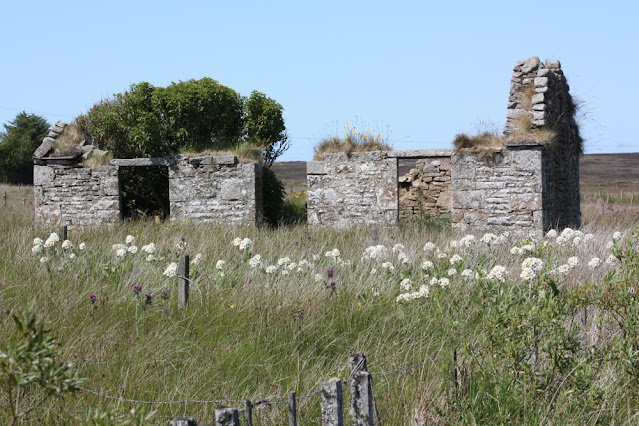 Darwin & HMS Beagle. In 1831, Captain Robert Fitzroy set sail on the HMS Beagle, launching from Plymouth. Part of his mission was to complete a survey of the South American coast he had started in 1829.  Charles Darwin was on the voyage as the ship’s naturalist, along with three Fuegians  Fitzroy was returning to their homeland of

Tierra Del Fuego (Land of Fire). The captains experiment to take them to England to educate them before returning them to spread civilisation in the new world had failed.   The three Fuegians, Jemmy Button, York Minster and Fuegia Basket made fun of Darwin being seasick.  Unfortunately a 4th Fuegian they named Memory Boat, had died while in England.

The traditional canoes used by the Fuegians were pointed at both ends, so they could manoeuvre quickly in any direction.  Traditional whaleboats were also pointed at both end for the same reason. Fitzroy used whaleboats to survey the coasts many inlets.  There is a pressed herbarium sheet of the Magellan Daisy (Senecio smithii) in the University of Cambridge, collected in the Straits of Magellan by Darwin on the 1831 voyage of HMS Beagle.

Senecio smithii.  The Magellan Daisy has stunning white flowers with seeds like a dandelion clock.  There are a few theories as to how and why the daisy was introduced to Caithness from South America. Did whalers bring it back for their sweethearts? Did the seeds stick to the whalers clothing? Did they bring it back to prove that they had been south? The Magellan Daisy could have been introduced to Caithness by ‘normal horticultural means’ including a whaler collecting the plant or seeds.

The Magellan Daisy has a short flowering season of only a few weeks, starting around the end of June.  It grows in abundance on the Orkney and Shetland Isles, and a few locations in Caithness where the climate and soils/landscape is similar to that of it’s native Patagonia, Tierra Del Fuego.  The flower is  known in Shetland as the Patagonia Daisy, South Georgia Daisy and NZ Daisy. 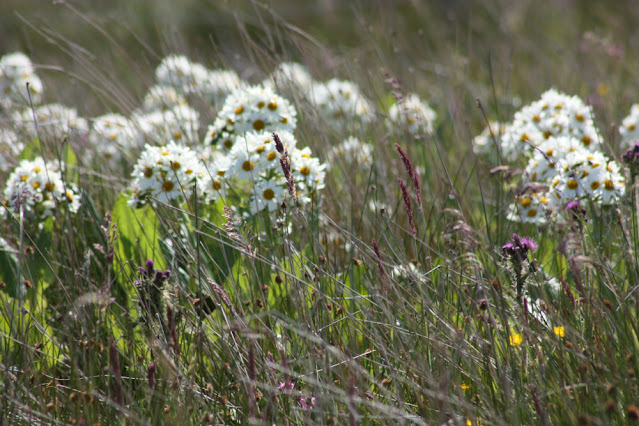 Adverts for shepherds wanted in Patagonia, Tierra Del Fuego, appeared in 19th & 20th  Century Scottish Highland newspapers. With more men than women in Patagonia, many Scots returned home to find a wife.  Did they bring them a bunch of Magellan Daisies? 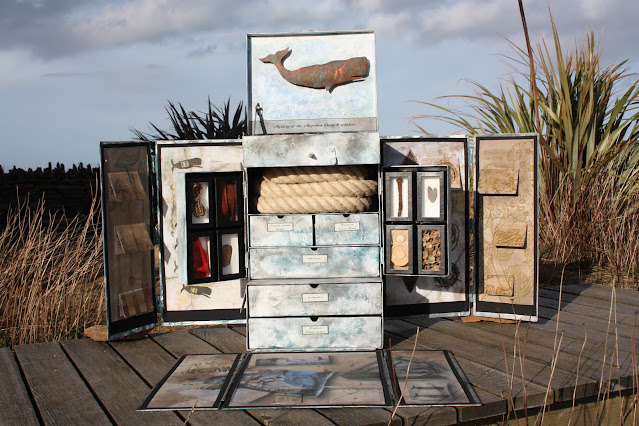