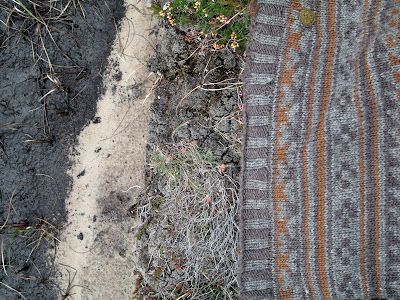 I've been invited to take part in an exhibition curated by Bruno Vinhas, the gallery director of  the Craft Council of Newfoundland and Labrador.  'Sensorius' is to open in August 2021 at their gallery in St.Johns, Newfoundland.  The exhibition is themed on accessible tactile work.  This Orkney Jumper is at the centre of my new work for the exhibition.

Click here to read more about this project and the jumper which continutes to spark memories as my search for Camilla Eames contiues.

Thanks to Clare Jenkins ( www.pennineproductions.co.uk ) for getting in touch and allowing me to share yet another fascinating chapter in the search.

" .....   I’ve just seen that you were looking for Camilla Eames in connection with your forthcoming exhibition. Did you get any leads? The last address I have for her was in Bedfordshire, where she moved after she left Orkney.

I don’t know her myself, only met her once – in Bhuj in Gujarat, where I was making a feature for Woman’s Hour on Radio 4 about Indian textiles. She was staying in the same hotel as us, along with a friend called Diane or Diana or wrote a regular column for the Glasgow Herald. We got talking about embroidery, and she mentioned that she’d just moved from Orkney after seven years there. We’d visited Orkney a few times and I’d fallen in love with the islands, so we had long conversations about them. It seemed so odd to be talking about Orkney in the heat of Gujarat, but then I find that the place has that effect on people......

...... I came across your search because I’ve just been in touch with a textile artist called Rosalind Johansson, formerly of Sweden, now of Orkney.

I looked on her website and saw that she’d travelled extensively herself, so I wrote:
“Have you been to India? If not, Gujarat has wonderful textiles – well, all of India does, of course, and we have a fair few of them hanging in our house! I once made a Woman’s Hour feature about Indian textiles, and met Rabari women in villages in Gujarat who were great embroiderers. One day, in the Hotel Prince in Bhuj where we were staying (and which later was destroyed by the earthquake), we met a British woman who, it turned out, had just left Kirkwall – Camilla Eames, who ran a clothes shop opposite the council offices. Weirdly, I’ve just Googled her and found this:
https://onhometurf.blogspot.com/2020/08/an-orkney-jumper.html?fbclid=IwAR2F7sPpN-HKQFteeJNfouFEAwa8UAd0mw5aqHJzF3YG_XqglFJe9I3XXqc
More strange coincidences!”
But India and Orkney share that capacity for ‘ordinary magic’. They’re great ‘bonders’. Three years ago, my husband and I had finished our walk at Mull Head in Orkney and, as we pulled out of the car park to return to Kirkwall, we saw a woman scurrying up the road. She was trying to catch the last bus back to Kirkwall, so we gave her a lift. In the 10 minutes it took to get there, we discovered (how?!) that she was a Scottish ex-Buddhist nun, had lived near Dharamsala in India for 18 years (we know the place well, once interviewed the Dalai Lama there), had woken one morning realising the universe was telling her to change path, two friends independently suggested Orkney, so here she was, one month later. We found we had a lot in common and met her a few times during our fortnight there.
Then, later in the trip, it was our turn to accept a lift from a stranger as we scurried back to our car in heavy rain. In the five minutes that trip took, we discovered he, too, knew India well, went every year to Auroville near Pondicherry (and yes, we know Auroville, Steve’s a travel writer and has written about it), and knew other Buddhists on Orkney. So we put Kay, our Buddhist nun, in touch with them....
... Caithness is wonderful, too. We had have friends who lived at Lybster, and often visited them there ...."
Click here to read more about this project and the jumper.
Labels: An Orkney Jumper